UV Nail Lamps Do NOT Cause Skin Cancer – heres why! 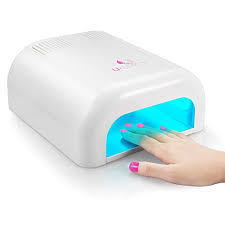 UV Nail Lamps Do NOT Cause Skin Cancer – heres why!

Recently there has been an increase in the number of scaremongering articles and posts being shared online about the ‘dangers’ of UV lamps used during gel nail application.

We are here to educate and set the record straight on these factually incorrect articles!

Recently three industry scientists – Doug Schoon, Paul Bryson and Jim McConnell got together to test the claims made in a report by two Texas-based dermatologists that the lamps are a source of “high-dose UV-A.”

They tested the leading UV nail lamps to determine how much UVA and UVB they emit and then compared that to natural sunlight.

They concluded that the dermatologists’ report overestimated the exposure of client skin to UV light emitted from UV nail lamps. In fact, they noted, clients’ hands are likely to be exposed to more UV light while driving their cars than they will receive from UV gel nail services.

They concluded that the UV-B output for both UV nail lamps was less than what was found in natural sunlight. Which isn’t surprising as the bulbs used in UV nail lamps contain special internal filters that remove almost all UVB.

The amount of UVB to which a client’s skin is exposed is equal to what they could expect from spending an extra 17 to 26 seconds in sunlight each day of the two weeks between their nail salon appointments.

They also found that the UVA exposure is much lower than suggested in the dermatologists’ report. Test results show that UV-A exposure for client skin is equivalent to spending an extra 1.5 to 2.7 minutes in sunlight each day between salon visits.

A second study was conducted by two world leading scientists specializing in UV effects on the skin: Dr Robert Sayre, Inventor of the SPF rating system for sunscreen and his associate Dr John Dowdy of Rapid Precision Testing Labs Cordova Tennessee. After extensively studying many types of traditional and LED UV nail lamps, this world-renowned team discovered that exposure resulting from regular salon use of UV nail lamps is equivalent to receiving between 0.5% to 2.2% of the permissible monthly UV exposure defined by internationally accepted standards.

After considering all of these facts, including the relatively low level of UV released by nail lamps, Dr. Sayre concluded, “UV nail lamps are safer than natural sunlight or sunlamps… and properly belong in the least risky of all categories.”